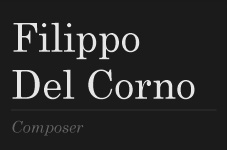 The City of Copenhagen, European Capital of Culture in 1996, invites him to participate in the collective composition of European Requiem, written by young poets and composers from different areas and cultures of Europe.

In 1997, in collaboration with Carlo Boccadoro and Angelo Miotto, he founds the group for contemporary music Sentieri selvaggi.

In 2001 he writes Orfeo a fumetti, a chamber opera based on the comic book “Poema a fumetti” by Dino Buzzati. The opera is premiered in Milano and then performed in Torino, Mantova and Roma.

In 2002 his opera Non guardate al domani, based on a libretto by Angelo Miotto about the kidnapping and the murder of Aldo Moro, is selected for the workshop phase of “the Genesis Prize for Opera”, and the first part is performed in London by Almeida Opera. After a long work in progress the opera is premiered in 2008 (Milano).

In 2009 the international Festival MiTo Settembre Musica produces his work Io Hitler, on a text by the italian writer Giuseppe Genna. The staging, directed by Francesco Frongia and conducted by Carlo Boccadoro, takes place at Teatro Franco Parenti in Milano.

His works have been recorded for different labels such as Cantaloupe, RaiTrade, BMG Ricordi, EMI Classics, Sensible Records, Stradivarius and Thymallus; his music is published by RaiTrade Edizioni Musicali, Ricordi, Suvini Zerboni and Sonzogno.
Since December 2011 to March 2013 he has been appointed as Chairman of the Board of Fondazione Milano.  In March 2013 he is appointed Councillor for Culture of Milano.